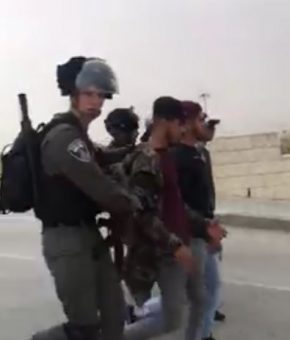 Israeli soldiers abducted, on Sunday evening, three Palestinian children from the al-‘Isawiya town, in occupied East Jerusalem, and took them to Salaheddin Police Station in the city.

The Israeli army claimed that three children “were involved in hurling Molotov cocktails at a military roadblock near Maale Adumim colony.”

Silwanic added that the soldiers also invaded Silwan town, south of the Al-Aqsa Mosque, and tried to remove a large sign congratulating the residents of the approaching holy Muslim Month of Ramadan, but the locals prevented them from confiscating it.

On Saturday at night, the soldiers abducted two young Palestinian men from the African Neighborhood, in occupied East Jerusalem, after a group of extremist Israeli colonialist settlers attacked them.

Media sources in Jerusalem said the colonialist settlers attacked the two Palestinians, identified as Nasri al-Farrawi and Ali al-Farrawi, while participating in decorating their neighborhood and al-Wad Street leading to the al-Aqsa Mosque, in preparation for Ramadan.