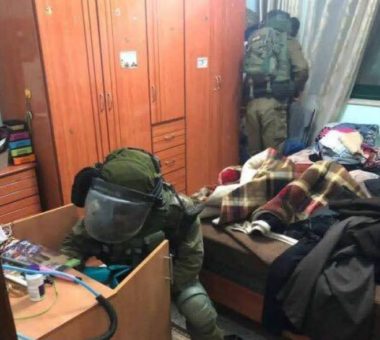 Israeli soldiers abducted, Thursday, three Palestinians from several parts of the occupied West Bank, including one near the Al-Aqsa Mosque in occupied East Jerusalem, the Palestinian Prisoners’ Society (PPS) has reported.

In Hebron, in the southern part of the West Bank, the soldiers abducted a young man, identified as Lu’ay Faisal al-Hashlamoun, from his home.

On Thursday at noon, the soldiers abducted a young man, identified as Amir Zghayyar from the courtyards of the Al-Aqsa Mosque in occupied Jerusalem, and took him to a nearby police station.

It is worth mentioning that dozens of soldiers and police officers accompanied colonialist settlers into the courtyards of the Al-Aqsa Mosque, after forcing the Palestinians away.

In addition, the soldiers invaded the eastern area of Shu’fat, northeast of Jerusalem, and photographed several homes and buildings.

Furthermore, the soldiers installed a military roadblock at the eastern entrance of Qalqilia city, in northern West Bank, before stopping and searching many cars, and interrogated the residents while inspecting their ID cards.