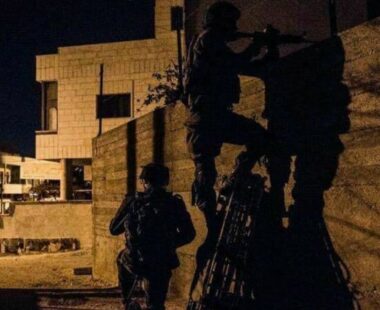 Israeli soldiers abducted, on Wednesday at dawn, three Palestinians in addition to invading and ransacking homes and shops in Nablus, in northern West Bank.

They added that the soldiers stopped and searched dozens of cars at the permanent military roadblock and interrogated many Palestinians while inspecting their ID cards.

In addition, the soldiers invaded the western and central areas of Nablus city, before invading and ransacking homes.

The soldiers also wired and detonated the doors of many shops before invading and violently searching them.

Also at dawn, the soldiers invaded the town of Jaba’, south of the northern West Bank city of Jenin, before abducting two young men, and wounding dozens of Palestinians.