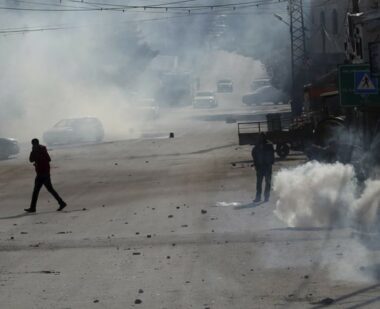 Several Israeli military vehicles invaded, on Wednesday at dawn, the town of Jaba’, south of the northern West Bank city of Jenin, before abducting two young men, and wounding dozens of Palestinians.

Media sources said the soldiers invaded the town from several directions, before storming into homes and violently searching them.

They added that the soldiers abducted Maad Emad Kanaan and Eyad Yousef Malaysha from their homes and took them to an unknown destination.

The invasion led to protests before the soldiers fired many live rounds, gas bombs, and concussion grenades at the protesters and many surrounding homes.

Medical sources said dozens of residents, mainly those in their homes, suffered the effects of tear gas inhalation and received the needed treatment.

On Tuesday evening, the soldiers invaded Hizma town, northeast of occupied Jerusalem, leading to protests, and fired many gas bombs and concussion grenades at several homes.