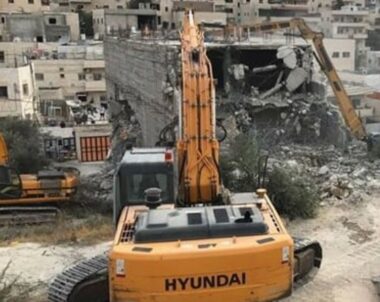 Eyewitnesses said several Israeli military jeeps, and a bulldozer, invaded an area near the main entrance of the village, before demolishing the carwash facility.

They added that the destroyed facility is owned by a local man, identified as Khalil Ibrahim Oweiss.

The Israeli army claims that Oweiss, who built the facility on his land, did not obtain a permit from the “Civil Administration Office,” the administrative branch of the illegal Israeli occupation.

On Wednesday at dawn, the soldiers abducted three Palestinians in addition to invading and ransacking homes and shops in Nablus.

Also, the soldiers abducted a young man, while illegal colonizers assaulted a Palestinian family, in the Hebron district, in the southern part of the occupied West Bank.

Furthermore, the soldiers invaded the town of Jaba’, south of the northern West Bank city of Jenin, before abducting two young men, and wounding dozens of Palestinians.