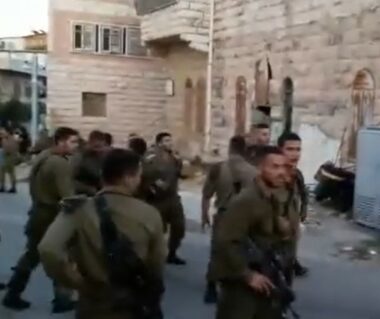 Israeli soldiers abducted, on Wednesday at dawn, a young man, while illegal colonizers assaulted a Palestinian family, in the Hebron district, in the southern part of the occupied West Bank.

They added that the soldiers also installed roadblocks at roads leading to many towns and refugee camps in Hebron, before stopping and searching dozens of cars, and interrogated many Palestinians while inspecting their ID cards.

Furthermore, illegal Israeli colonizers, squatting in the Ramat Yoshai colony, which was built on stolen Palestinian lands in the Tal Romedia neighborhood in Hebron, attacked the home of Bassam Ali Abu Aisha, before assaulting him and his family.

Israeli soldiers were in the area and did not attempt to stop the assailants, eyewitnesses said.

Also at dawn, the soldiers invaded the town of Jaba’, south of the northern West Bank city of Jenin, before abducting two young men, and wounding dozens of Palestinians.