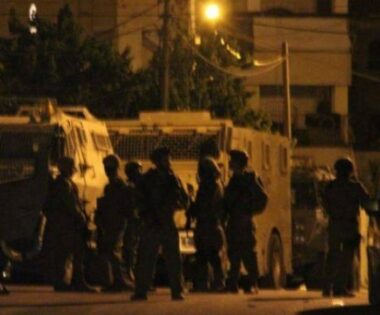 Israeli soldiers abducted, on Saturday at dawn, three Palestinians from their homes in Ethna town, west of Hebron city, in the southern part of the occupied West Bank.

Local sources said several army jeeps invaded the town before the soldiers broke into and searched many homes.

They added that the soldiers abducted three Palestinians from their homes, identified as Ahmad Islamiyya, Akram al-Qaisi, and Ismael Tmeizi, before taking them to a nearby detention and interrogation facility.

The soldiers also installed roadblocks in several parts of the Hebron governorate, before stopping and searching dozens of cars, and interrogated many Palestinians while inspecting their ID cards.

On Friday evening, the soldiers abducted a young Palestinian man from the northern West Bank governorate of Jenin, while walking in the courtyards of the Al-Aqsa Mosque, in the occupied capital, Jerusalem.