Israeli Soldiers Abduct A Palestinian In Al-Aqsa In Occupied Jerusalem 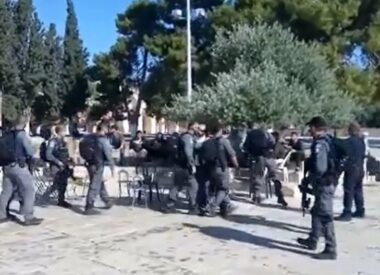 Israeli soldiers abducted, on Friday evening, a young Palestinian man from the northern West Bank governorate of Jenin, while walking in the courtyards of the Al-Aqsa Mosque, in the occupied capital, Jerusalem.

Media sources said the soldiers abducted Anas Omar Kanaan, from Jaba’ town, south of Jenin, after performing prayers in the holy site, and took him to a nearby detention facility, for “entering Jerusalem without a permit.”

In related news, many army jeeps invaded on Saturday at dawn, Silat al-Harithiya town, northwest of Jenin, and installed many roadblocks near various surrounding villages, including Marka, Arraba, Anza, Ya’bad, and Jaba’.

The army also continued the closure of the Jenin-Nablus Road for the second day, to allow groups of fanatic illegal Israeli colonizers to continue their marches in the area.

On Thursday evening, the colonizers attacked many Palestinian cars on the Jenin-Nablus Road, causing damage.

Daghlas added that the attacks took place near various towns, especially Sebastia, Burqa, and Bazaria, where the colonizers gathered and closed roads.