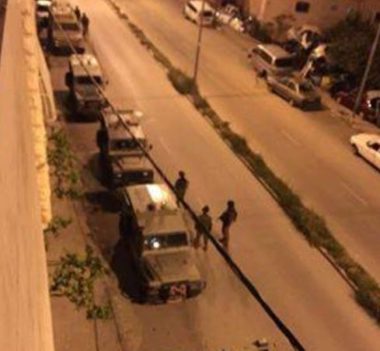 Israeli soldiers abducted, on Thursday at dawn, at least thirteen Palestinians from their homes, in several parts of the occupied West Bank, the Palestinian Prisoners’ Society (PPS) has confirmed.

The PPS office in Jenin, in northern West Bank, said the soldiers invaded and searched many homes in the governorate, and abducted five Palestinians from Sielet al-Harithiya town and Jenin refugee camp.

It stated that the soldiers abducted a former political prisoner, identified as Khaled Abdul-Karim Jaradat, in addition to Rafat Taiseer Abu Hammad and Madhi Sameeh al-Kilani, from their homes in Sielet al-Harithiya.

In addition, the army fired many rubber-coated steel bullets and gas bombs at many protesters in Jenin refugee camp.

In Hebron governorate, in the southern part of the occupied West Bank, the soldiers abducted Ashraf Salah al-Badarin, and his daughter-in-law, Naseeba Ahmad al-Badarin, after invading their homes in the as-Sammoa’ town.

The army searched many homes in the town, in addition to Doura nearby town, and interrogated many Palestinians.

In Ramallah in central West Bank, the soldiers abducted Majdi Shawqi, from his home in Deir Ghassana village.

In Hebron city, the soldiers invaded and searched a library in Wadi al-Harya area, and installed roadblocks on the main entrances of several towns, south of Hebron, before stopping and searching dozens of cars, and interrogated many Palestinians while inspecting their ID cards.

In Bethlehem, the soldiers invaded the Deheishe refugee camp, south of the city, and abducted a wounded Palestinian, identified as Mohammad Raed Shamrookh, 19, while former political prisoner, Omar Mousa Qawwar, 19, was taken prisoner from his home in Doha town.

During the invasion into Deheishe refugee camp, the soldiers fired many live rounds, rubber-coated steel bullets and gas bombs at many protesters, and several surrounding homes.

Media sources one infant, identified as Najeh Tha’er al- Me’awi, only 40 days of age, suffered the severe effects of teargas inhalation, and was rushed to a hospital in Bethlehem city.