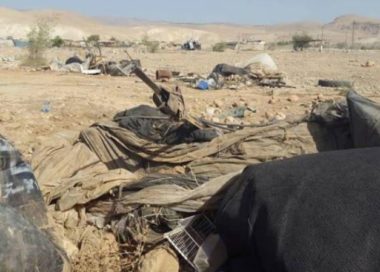 Israeli soldiers invaded, Thursday, Masafer Yatta area, south of Hebron, in the southern part of the occupied West Bank, a demolished a residential tent of a Palestinian Bedouin family.

Rateb Jabour, the coordinator of the Popular and National Committee in southern West Bank, said the soldiers demolished a residential tent, providing shelter for Isamel al-‘Adra and his family.

Jabour added that the army has been escalating its violations against the Palestinians in the area, including the demolition of homes, tents and property, in addition to causing damage to structures, agricultural lands, wells and water networks.

In related news, the soldiers abducted, on Thursday at dawn, at least twelve Palestinians from their homes, in several parts of the occupied West Bank, the Palestinian Prisoners’ Society (PPS) has confirmed.

The soldiers also injured an infant, identified as Najeh Tha’er al- Me’awi, only 40 days of age, from Deheishe refugee camp, who suffered the severe effects of teargas inhalation, and was rushed to a hospital in Bethlehem city.

On Thursday at dawn, the soldiers, Kobar village, north of the central West Bank city of Ramallah, and demolished a home owned an imprisoned father, who was abducted with his son in December of last year, and is also the father a young man, who was killed by the army on December 12th, 2018.

The soldiers also demolished a home in the village of Burqa, north of the northern West Bank city of Nablus.