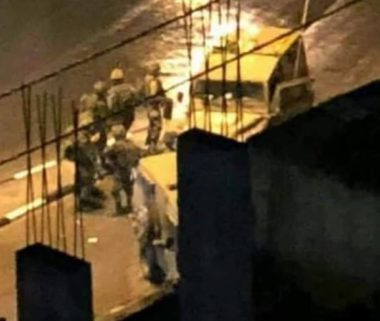 Israeli soldiers injured, on Thursday morning, a Palestinian infant, who suffered the severe effects of teargas inhalation, and abducted two Palestinians, in the Deheishe refugee camp and Doha town, south and west of Bethlehem in the occupied West Bank.

Dozens of soldiers invaded the Deheishe refugee camp, and fired many live rounds, rubber-coated steel bullets and gas bombs at many protesters, and several surrounding homes.

Media sources one infant, identified as Najeh Tha’er al- Me’awi, only 40 days of age, suffered the severe effects of teargas inhalation, and was rushed to a hospital in Bethlehem city.

They added that the soldiers also abducted a Palestinian, identified as Mohammad Raed Shamrookh, 19, who was shot and injured in a previous invasion, after storming his family’s home and searching it.

The soldiers also abducted a former political prisoner, identified as Omar Mousa Qawwar, 19, after storming his home, in Doha town, and violently searching it.