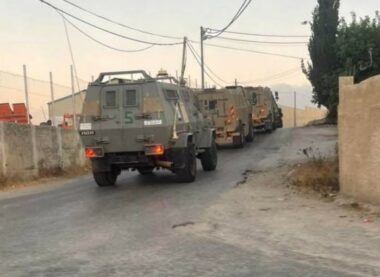 On Monday, Israeli soldiers abducted twelve Palestinians, including six children, in the occupied West Bank in Ramallah, Jerusalem, and Bethlehem. The army also abducted fifteen Palestinians and killed a child at dawn.

In Ramallah, in the central West Bank, the soldiers abducted a former political prisoner, Rafat Issa Hammad, 23, from Silwad town, after stopping him at a military roadblock west of Silwad.

Also, illegal Israeli colonizers hurled stones at Palestinian cars on the main road near the Al-Mughayyir village, northeast of Ramallah, before the soldiers closed the road and prevented the Palestinians from crossing.

The Palestinian was abducted in the same area where, a day earlier, the soldiers killed Ahmad Hasan Abdul-Jalil Kahala, 45, after forcing him out of his car.

In Qabatia, south of the northern West Bank city of Jenin, the soldiers abducted three Palestinians, former political prisoner Rabea Ali Kamil, Mohammad Adam Zakarna, and Ibrahim Ahmad Zakarna, after summoning them for interrogation at the Salem military base, west of Jenin.

The soldiers also abducted Majd Al-Wa’ri from Beit Hanina town, north of Jerusalem, when he was released from the Negev Detention Camp after spending 28 months in captivity.

In addition, an Israeli court issued an order denying a child, Moayyad Balbeesy, from entering the Old City for two weeks.

In Tuqu town, southeast of Bethlehem, the soldiers invaded the Khirbat Ed-Deir area in the center of the town and abducted Kamel Salama, 48, Baha’ Mohammad Sbeih, 15, Ahmad Kamel Sbeih, 15, and Rida Hamdan Sbeih, 16.

Many Palestinians suffered the effects of tear gas inhalation during protests that took place after the army invaded the town.

On Monday dawn, Israeli soldiers abducted fifteen Palestinians from their homes in several parts of the occupied West Bank.

In related news, a Palestinian child, Amro Khaled Al-Khmour, 14, who was seriously injured by Israeli army fire at dawn in the Deheishe refugee camp, south of Bethlehem, has died from his wounds.