Army Abducts Two Guards Of Al-Aqsa Mosque In Jerusalem, One Palestinian Near Jenin 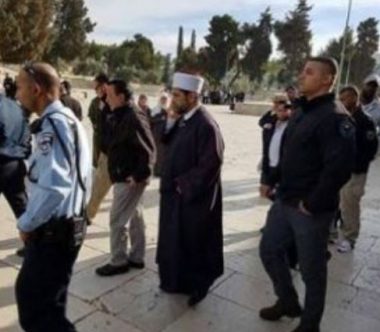 Israeli soldiers invaded, On Monday morning, the courtyards of the Al-Aqsa Mosque, in occupied East Jerusalem, and abducted two local guards after they prevented the soldiers from confiscating some of its ancient stones to send them to an Israeli archeologist. The soldiers also abducted one Palestinian, near Jenin, in the northern part of the occupied West Bank.

The WAFA Palestinian News Agency said many soldiers, and police officers, invaded the courtyards of the Al-Aqsa Mosque, and abducted two of its guards, identified as Salman Abu Mayyala, and Luay Abu Sa’ad, before taking them to a detention and interrogation center, in the Jerusalem’s Old City.

It added that the Al-Aqsa Mosque head, Sheikh Omar Kiswani, tried to prevent the soldiers from assaulting and abducting the two guards, but the officers kept pushing him away in a violent manner.

The soldiers were trying to illegally confiscate ancient stones from the Muslim holy site, to send them to an Israeli archeologist.

On Monday at dawn, the soldiers invaded Kafr Ni’ma village, west of the central West Bank city of Ramallah, before breaking into and searching the home of a Palestinian artist, identified as Osama Nazzal, and confiscated his Caricatures.

It is worth mentioning that the army abducted, at dawn, fourteen Palestinians, including a recently-released political prisoner, in different parts of the occupied West Bank, five of them, including two children, from Bethlehem.