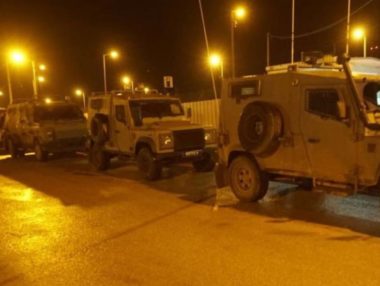 The Palestinian Prisoners Society (PPS) has reported that the soldiers abducted a former political prisoner, identified as Morad Tawalba, while heading to Jerusalem to pray in Al-Aqsa Mosque.

It added that the abducted former political prisoner is also a member of the Executive Committee of the Popular Services Commission in Jenin refugee camp.

In addition, the soldiers abducted a young man, identified as Abdullah al-Jar, also while trying to enter Jerusalem, on his way to the Al-Aqsa Mosque.