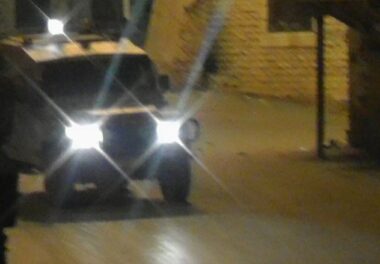 Israeli soldiers abducted, on Monday morning, two young Palestinian men from their homes in Beit Ummar town, north of Hebron city, in the southern part of the occupied West Bank.

They added that the soldiers abducted two young men, identified as Khaled Issa Sleibi, 21, and Jihad al-‘Allami, before moving them to an interrogation facility.

In related news, the soldiers invaded homes in several neighborhoods in Hebron city, and briefly detained many schoolchildren near the Ibrahimi Mosque, while heading to their educational facilities.

The soldiers also installed roadblocks at the main entrances of Sa’ir and Halhoul towns, before stopping and searching dozens of cars, and interrogated scores of Palestinians while inspecting their ID cards.

On Monday at dawn, the soldiers abducted two Palestinians in Ramallah, in the central part of the occupied West Bank.

On Sunday at night, dozens of Israeli soldiers invaded Sielet al-Harthiya town, west of the northern West Bank city of Jenin, took measurements of two Palestinian homes in preparation for demolishing it.