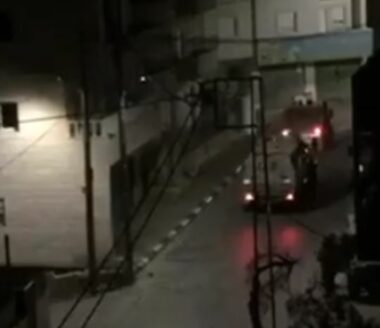 Israeli soldiers abducted, on Sunday at dawn, two Palestinians from their homes in the West Bank governorates of Jenin and Hebron.

Media sources in Jenin said the soldiers invaded Rommana town, west of the city, before breaking into homes and searching them.

They added that the soldiers abducted a former political prisoner, identified as Mahmoud Mohammad Bushnaq, after invading and searching his home and the home of his brother, Husam.

In Hebron, in southern West Bank, the soldiers invaded the Shiokh town, northeast of the city, searched homes and abducted Mohammad Rezeq Halayqa, 19.

On Saturday evening, the soldiers closed the bypass road near Beit Einoun junction, northeast of Hebron, and prevented the Palestinians from crossing, inflicting further suffering on the residents who had to look for longer alternate roads to reach their homes amidst the cold, especially the snow.

Earlier Saturday, the soldiers abducted a Palestinian man after the army assaulted and injured his father near Jericho, and a young man in Silwan town, in occupied Jerusalem, in the West Bank.