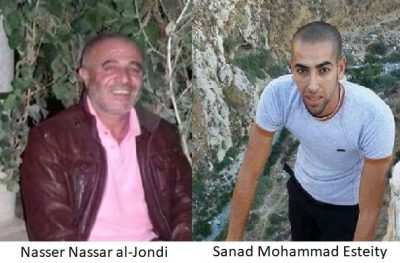 Israeli soldiers abducted, on Saturday evening, two Palestinians at two military roadblocks near the northern West Bank city of Jenin, and near Hebron in the southern part of the West Bank.

The soldiers installed a sudden roadblock near Jenin, and abducted Sanad Mohammad Esteity, while he was on his way to his work in Ramallah, in central West Bank.

Furthermore, the soldiers installed a sudden roadblock at the entrance of the al-Fawwar refugee camp, stopped and searched many cars, and abducted Nasser Nassar al-Jondi, 44, from Yatta town, south of Hebron.

The Palestinian was in a taxi when the soldiers abducted him, and took him to an unknown destination.

In related news, the soldiers installed many roadblocks, completely surrounding Azzoun town, east of the northern West Bank city of Qalqilia, and prevented the Palestinians from entering or leaving it without thoroughly searching them and their cars.

The soldiers also invaded the town from its western part, and conducted extensive military searches of property.