Israeli Colonists Attack Palestinians In Their Olive Orchards Near Nablus 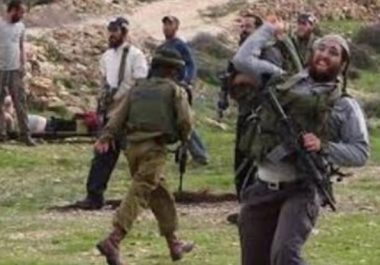 Several Israeli colonists attacked, on Saturday evening, many Palestinians while picking their olive trees in their own orchards, in Huwwara town, south of the northern West Bank city of Nablus.

The Palestinians were assaulted by many colonists from Yitzhar illegal settlement, which was built on Palestinian lands south of Nablus.

The assault took place in the al-Halloum area, in Huwwara; the Palestinians managed to overcome the colonists, forcing them to flee the area.

Such attacks significantly increase each year during the olive harvest season, and largely target orchards that became in close proximity to illegal colonies and outposts, built stolen Palestinian lands.

Other violations include burning trees and farmlands, flooding farmlands with sewage water, in addition to cutting and uprooting the trees, and illegally confiscating them by installing outposts and barbed wires.

The Israeli army largely ignores these attacks, and refrains from intervening, unless the violations lead to clashes with the Palestinians, and in such cases, the soldiers frequently resort to excessive force against the Palestinians, including the use of live fire, gas bombs and rubber-coated steel bullets.