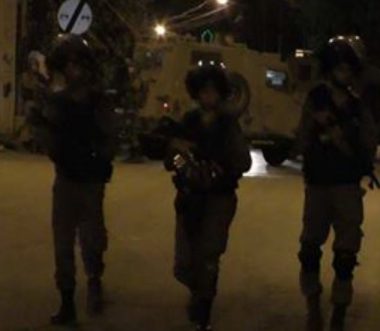 Israeli soldiers abducted, overnight and at dawn Sunday, fourteen Palestinians, after breaking into their homes and searching them, in several parts of the occupied West Bank.

The Hebron office of the Palestinian Prisoners’ Society (PPS), in the southern part of the West Bank, has reported that the soldiers conducted extensive military searches of many homes in the governorate, and abducted six Palestinians.

It stated that the soldiers invaded Beit Awwa town, south of Hebron, and abducted Abdul-Hamid Matar Abu Sharar, and his brother Amin, in addition to Mohammad Nidal al-Masalma.

The soldiers also invaded Sa’ir town, east of Hebron, searched homes and abducted Hijazi Rawhi Jaradat, after breaking into his home and searching it.

Also in Hebron, the soldiers invaded Beit ar-Roosh al-Foqa village, in Doura city, south of Hebron, and conducted violent searches of many homes.

The army claimed that the soldiers were looking for weapons, and managed to locate and confiscate two pistols and a homemade rifle.

In Ramallah, in central West Bank, the soldiers abducted one Palestinian, identified as Sharhabeel Kanaan, after stopping him at a military roadblock west of Ramallah.

Two other Palestinians, identified as Mohammad Monir Nakhla and Hamza Mohammad Abu al-Jalil, were taken prisoner from their homes in the al-Jalazonerefugee camp, north of Ramallah.

Furthermore, the soldiers invaded the home of former political prisoner and a political leader of Hamas, Jamal Tawil, in the al-Biereh city, and summoned him for interrogation, after detaining him and his family in one room in their home, while ransacking the property.

Tawil was informed that he must head to Ofar military base, west of Ramallah, for interrogation on October 10.

In Bethlehem, the soldiers invaded Wad Shahin area, in the center of the city, and abducted Idrees Suleiman Obeyyat, 19, in addition to Waleed Ezzat Deeriyya, 26, who was taken prisoner from his home in Beit Fajjar town, south of Bethlehem.

Clashes were reported in the Manger Square rea in Bethlehem, after the soldiers invaded it. The army fired many gas bombs and concussion grenades; there have been no reports of injuries.