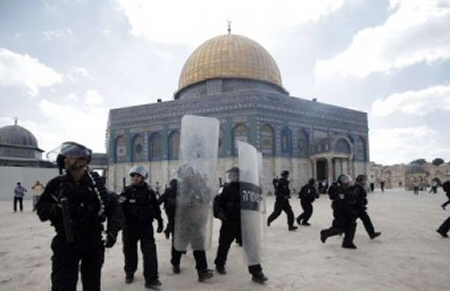 Israeli soldiers abducted, earlier on Monday, a young Palestinian man from the courtyards of the Al-Aqsa Mosque, in occupied East Jerusalem, and one Palestinian in ‘Aida refugee camp, north of Bethlehem. One Palestinian was injured near Al-Aqsa after colonialist Israeli settlers assaulted him.

Local sources said the soldiers invaded and violently searched homes in the Old city, interrogated several young men, and abducted one, before moving him to an interrogation center in the city.

On Sunday at night, several settlers attacked a young man, south of Jerusalem, and fled the area using a vehicle that was waiting close to the area of the attack.

The Israeli police said the assailants managed to flee the scene, while the young man suffered moderate wounds, and was moved to a hospital in the city.

Also at dawn, the soldiers abducted three Palestinians, including a legislator, and a son of another legislator, after invading their homes, and searching them, in the southern West Bank district of Hebron.