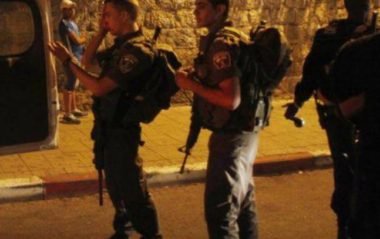 Israeli soldiers abducted, on Thursday at night and Friday morning, two young Palestinian men in Ramallah and Hebron, in the occupied West Bank.

Media sources in Ramallah, in central West Bank, said the soldiers summoned for interrogation Nasser Hani Rimawi, 26, from Beit Rima town, north of the city, and abducted him once he arrived at the Ofer Israeli prison.

Furthermore, the soldiers invaded Yatta town, south of the southern West Bank city of Hebron, and abducted Ayman Mohammad Moghannam, from his home.

The soldiers invaded and violently searched the homes of Ayman and his brother Amin, causing damage.

In addition, the soldiers invaded Beit Ummar town, north of Hebron, before storming and ransacking several homes, and interrogated many Palestinians while inspecting their ID cards.

It is worth mentioning that the soldiers abducted, Thursday, a Palestinian child identified as Nofouth Hammad, 14, from Sheikh Jarrah neighborhood, in the occupied capital Jerusalem, and moved her to an interrogation facility.