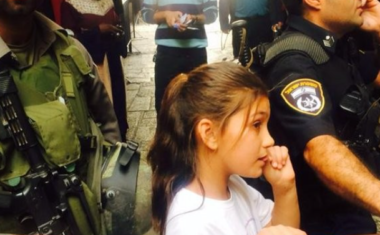 Israeli soldiers abducted, Thursday, a Palestinian child from Sheikh Jarrah neighborhood, in the occupied capital Jerusalem, and moved her to an interrogation facility.

Eyewitnesses said the soldiers abducted Nofouth Hammad, 14, at the entrance of the neighborhood, before taking her for interrogation at a Police station in Salahuddin Street, in Jerusalem.

They added that the child was participating in recreational activity in the neighborhood and was drawing the Palestinian flags with washable paint on the cheeks of her friends when the soldiers abducted her.