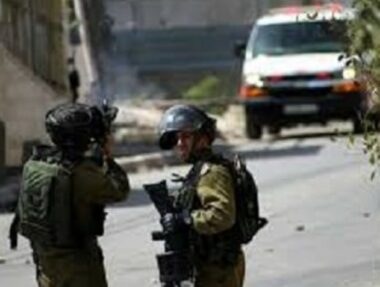 Israeli soldiers abducted, on Thursday evening, two Palestinians and injured dozens, during protests that erupted at the northern road of the al-Biereh city, in central West Bank, after the army attacked hundreds of residents marking the 17th anniversary of the death of late President Yasser Arafat.

Media sources said hundreds of Palestinians marched in the area, commemorating the death of Yasser Arafat, and chanting for liberation and independence before the soldiers started firing live rounds, rubber-coated steel bullets, gas bombs, and concussion grenades at them.

The Palestinian Red Crescent Society (PRCS) has confirmed that its medics provided treatment to 14 Palestinians who were shot with rubber-coated steel bullets, including two who were rushed to a hospital after being shot in the chest.

The PRCS added that 46 Palestinians suffered the effects of tear gas inhalation, and six sustained cuts and bruises.

The Israeli army also surrounded dozens of protesters and ambushed some of them, before abducting two and moving them to a nearby military base.