Army Abducts Two Palestinians, Summons One For Interrogation, In Hebron 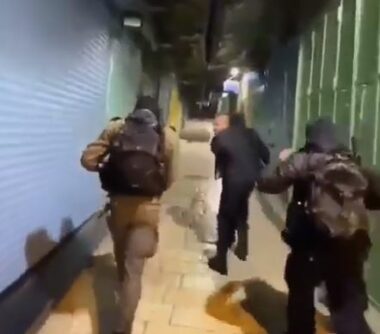 Israeli soldiers carried out, earlier Monday, massive and violent invasions, and searches of homes in Beit Ummar town, north of the southern West Bank city of Hebron, abducted two Palestinians and summoned one for interrogation.

He added that the soldiers cuffed and blindfolded the two Palestinians before moving them to Etzion military base and security center, north of Hebron.

During the invasions of homes, the soldiers forced the family of Ahmad Rashid Sabarna into one room in their property, while searching and ransacking it, and summoned his son, a former political prisoner, identified as Hatem Sabarna, for interrogation.

Many youngsters protested the invasions and hurled stones at the army jeeps, while the soldiers fired gas bombs and concussion grenades. Several Palestinians were injured and received the needed treatment by local medics.

It is worth mentioning that the soldiers also invaded many neighborhoods in Hebron city, and installed roadblocks on its northern road, in addition to the entrances of Sa’ir and Halhoul towns, before stopping and searching dozens of cars, and interrogated many Palestinians while inspecting their ID cards.

In Jenin, in northern West Bank, the soldiers abducted four Palestinians, including siblings and a former political prisoner, from their homes.

Furthermore, the soldiers abducted four young Palestinian men in Jerusalem, and two in Ramallah, in the occupied West Bank.

In related news, the soldiers abducted ten Palestinians from the same family in Teqoua’ town, east of Bethlehem, south of occupied Jerusalem in the West Bank, after the army stormed and ransacked many homes.