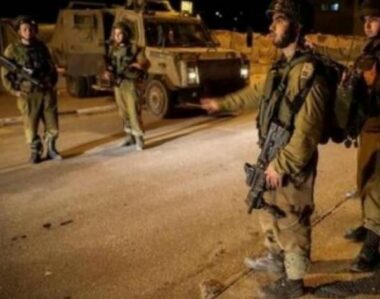 Media sources said the soldiers invaded Silwan town, and the at-Tour neighborhood, in the occupied Palestinian capital, Jerusalem, before invading and searching many homes, and abducted four young men.

The sources said the army abducted Adam Qara’in, 18, in Silwan town, after several soldiers assaulted him, causing cuts and bruises, and took him to an interrogation facility in the city.

The soldiers also invaded the al-Masayef neighborhood in Ramallah city, before breaking into and searching one home.

In related news, the soldiers abducted ten Palestinians from the same family in Teqoua’ town, east of Bethlehem, south of occupied Jerusalem in the West Bank, after the army stormed and ransacked many homes.