Army Abducts Two Siblings In Hebron, One In Tulkarem 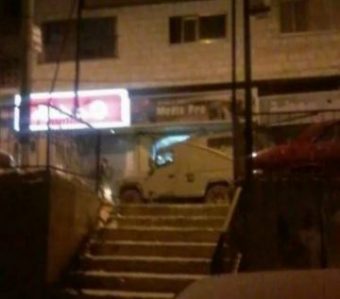 The Palestinian Prisoners’ Society (PPS) has reported that Israeli soldiers abducted, on Wednesday at dawn, two siblings from Hebron city, in the southern part of the West Bank, and one Palestinian near Tulkarem.

The Hebron office of PPS, in the southern part of the West Bank, said the soldiers invaded and searched many homes, in various neighborhoods throughout the city, and abducted two siblings.

In Tulkarem, in the northern part of the West Bank, the soldiers searched homes and abducted Bilal Mahmoud ‘Azem, 52, from Thannaba area, east of the city.

In Jerusalem, the soldiers summoned the mother of a Palestinian, who was killed by the army on October 12, 2015, for interrogation at a security center.

She is the mother of Mohammad Nathmi Shamasna, from Qotna village, northwest of Jerusalem; Israeli military fire killed her son, in Abu Ghost nearby village, while returning home from work.

In related news, the soldiers invaded ‘Aneen village, west of the northern West Bank city of Jenin, and abducted one Palestinian, in addition to detaining many Palestinians at a roadblock the army installed on the main road of Zabbouba village.