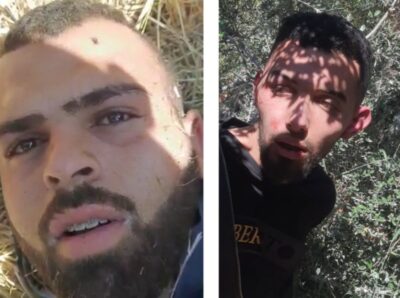 On Sunday, the Israeli army said it managed to arrest the two Palestinians believed to be behind the deadly attack in Elad, near Tel Aviv, on Thursday evening.

The army said the arrest was part of a four-day search campaign in cooperation with various military, security, and police agencies.

The two Palestinians, As’ad Refa’ey, 19, and Sobhi Sbeihat, 20, from Rommana town, west of the northern West Bank city of Jenin, were arrested near Tel Aviv.

A joint statement by the Israeli army, the police, and the Shin Bet Security Agency said that the two Palestinians were hiding less than a mile from where the attack, which led to the death of three Israelis, took place.

The statement said that the Palestinians were taken prisoner in a forested area not far from El’ad and that the “two allegedly admitted after their capture that they were behind the attack”. The police also found the axe that was reportedly used in the attack.

Israeli Ynet News said the two, who were taken prisoner Sunday morning, were hiding behind a bush in a quarry near Elad, and for the entire sixty-hour manhunt, they were unable to eat or drink.

The three Israelis killed in the attack were identified as Boaz Gol, Yonatan Havakuk, and Oren Ben Yiftah.