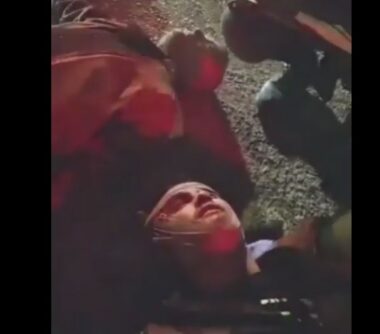 On Saturday night, Israeli soldiers injured several Palestinians, including one who was shot in the neck in Hares village, west of Salfit, in the central West Bank, after illegal Israeli colonizers invaded it.

Medical sources said the soldiers shot one Palestinian, Daoud Daoud, with a live round in the neck, causing a severe injury.

They added that the soldiers also shot three with rubber-coated steel bullets and caused many others to suffer the effects of tear gas inhalation.

The head of Hares Village Council, Omar Samara, said the residents intercepted an invasion by illegal Israeli colonizers into the western entrance of their village before the soldiers invaded it and opened fire at the Palestinians.

It is worth mentioning that the colonizers also cut and uprooted at least thirty olive trees in Qisarya and Arara, north of Kafr ed-Deek, west of Salfit.

The colonizers came from the illegal Bruchin colony, built on stolen Palestinian lands owned by residents from Kafr ed-Deek and Bruqin towns west of Salfit.

On Saturday evening, Israeli soldiers abducted three Palestinians, including a teenage boy, in Jenin and Tubas, in the occupied West Bank.

The soldiers also shot two Palestinians with rubber-coated steel bullets and caused many to suffer the effects of tear gas inhalation in Beit Ummar town, north of Hebron, in the southern part of the occupied West Bank.

Furthermore, illegal Israeli colonizers attacked a Palestinian man near Nablus in the northern part of the occupied West Bank, causing many injuries.