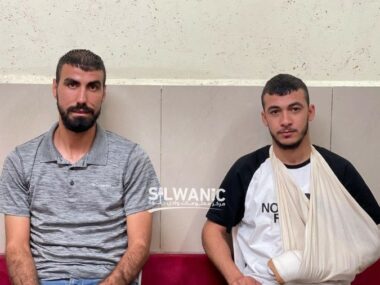 On Thursday evening, Israeli soldiers assaulted and abducted two young Palestinian men in Silwan town, in occupied Jerusalem in the West Bank, and released them after hours of interrogation, in addition to imposing strict conditions, including house arrest.

The Wadi Hilweh Information Center In Silwan (Silwanic) said dozens of soldiers invaded the Batn Al-Hawa neighborhood in Silwan before storming and violently searching the homes of Yazan Rajabi and Mo’taz Rajabi.

Mo’taz told Silwanic that the soldiers assaulted him after accusing him of throwing stones at the army.

However, the surveillance videos from his work proved that he was working at the time of the alleged stone-throwing incident.

Also, Yazan told Silwanic that both he and his cousin, Mo’taz, were accused of throwing stones at the soldiers; however, at the time of the alleged attack, he was detained and interrogated by the army at a facility in occupied Jerusalem.

He added that, three days earlier, he suffered fractures to his arm and fingers when the police repeatedly assaulted him.

The young man will be undergoing surgery next Monday for platinum implants in his arm.

Yazan said he tried to file a complaint against the officers who assaulted him, but the police refused to take his statement and told him he needed to head to a department in Tel Aviv instead.