Army Attacks Nonviolent Protesters In Hebron, Abduct A Man From A Wedding 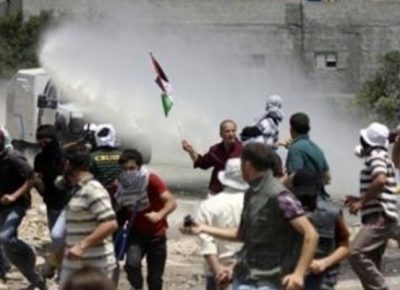 Israeli soldiers attacked, on Friday afternoon, dozens of nonviolent Palestinian protesters in Beit Ummar town, north of the southern West Bank city of Hebron, while marching in solidarity with the hunger striking Palestinian detainees in Israeli prisons. On Friday evening, the soldiers attacked a wedding celebration in Hebron, and abducted a young man.

Media sources in Hebron said the soldiers fired many gas bombs at the protesters, marching in solidarity with the detainees in Beit Ummar town, causing many Palestinians to suffer the effects of teargas inhalation.

The sources added that the soldiers used excessive force against the protesters, and assaulted many of them.

In Hebron city, the soldiers attacked a wedding celebration in Um ad-Daya area, in the southern part of Hebron. And abducted a young man, identified as Osama Fahmi Abu Turki, 28.

In related news, the soldiers assaulted dozens of Palestinian protesters in Beita town, south of the northern West Bank city of Nablus, and Beit Forik town, east of the city, wounding 66 Palestinians, including one who was shot with a live round in the face, and also fired at ambulances, causing damage.

Also on Friday, the soldiers killed a young Palestinian man, identified as Saba’ Nidal Obeid, 22, with a live round in the heart, in Nabi Saleh village, northwest of Ramallah in the occupied West Bank, and injured many residents.