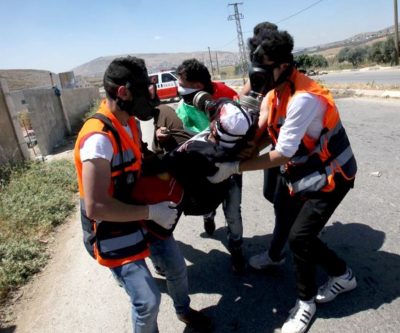 Israeli soldiers assaulted, Friday, dozens of Palestinian protesters in Beita town, south of the northern West Bank city of Nablus, and Beit Forik town, east of the city, wounding 66 Palestinians, including one who was shot with a live round in the face, and causing damage to three ambulances.

Ahmad Jibreel, the head of the Emergency Unit of the Red Crescent Society in Nablus, said the soldiers shot one Palestinian with an illegal expanding bullet in the face, in Beit Forik, and seven others with rubber-coated steel bullets, while dozens suffered the effects of teargas inhalation.

He added that the soldiers also shot sixteen Palestinians with rubber-coated steel bullets, and caused dozens to suffer the severe effects of teargas inhalation, in Beita.

Also among the wounded was the deputy-governor of Nablus governorate, Anan al-Ateera, who was shot with a rubber-coated steel bullet in his mouth.

Furthermore, the soldiers fired live round at a Red Crescent ambulance in Beita, including a round that struck and punctured one of its wheels, while transporting a wounded Palestinian to a hospital, and fired live rounds at two other ambulances, smashing their side and rear windows.

The army also attacked many protesters, holding Friday prayers near a military roadblock, installed by the soldiers at the main entrance of Beita town.

Also on Friday, the soldiers killed a young Palestinian man, identified as Saba’ Nidal Obeid, 22, with a live round in the heart, in Nabi Saleh village, northwest of Ramallah in the occupied West Bank, after the army attacked nonviolent protesters, and injured several others.