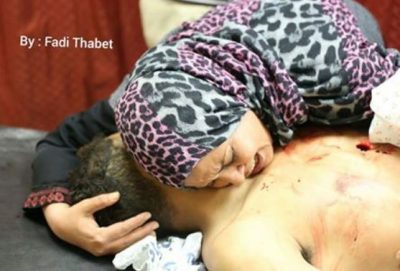 An updated study by the Al-Quds Center for Israeli and Palestinian Studies, revealed that the number of Palestinians, killed by Israeli fire since October 1, 2015, has arrived to 309 Palestinians, including Saba’ Nidal Obeid, who was fatally shot on Friday, May 12, 2017.

Al-Quds Center stated that the soldiers have killed eighty Palestinians in the Hebron governorate, 64 in Jerusalem, 29 in Ramallah, 24 in Jenin, 21 in Nablus, 18 in Bethlehem, 6 in Tulkarem, 6 in Salfit, 4 in Qalqilia, one in Tubas, and 35 in the Gaza Strip.

Among the slain Palestinians are 83 children; the youngest of them was an infant, identified as Ramadan Mohammad Thawabta, only eight months of age, who suffocated to death by Israeli gas bombs, fired at his family’s home.

The center added that the soldiers also killed 28 women, including 10 children, in the same timeframe, the youngest of them was Rahaf Hassan, two years of age, who was killed along with her pregnant mother, Nour, 30, in October of last year, after the soldiers fired missiles at homes on Gaza.

Israel is still holding the corpses of seven Palestinians who were killed since October 1st, 2015, as an act of punishment against their families.

Among the slain Palestinians are Sa’id al-Amro, who also held a Jordanian citizenship, in addition to Bashar Mohammad Masalha, Mohammad Ayyad and Abdul-Rahman Barghouthi, who were American citizens.

It is worth mentioning that a Sudanese man, identified as Kamel Hassan, 32, was killed by the soldiers, in February of last year, allegedly after stabbing an Israeli soldier in the central bus station in Ashkelon, causing moderate injuries.