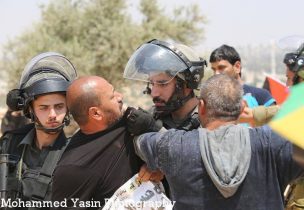 Dozens of Palestinians, accompanied by Israeli and international peace activists marched, Friday, in Bil’in village, west of Ramallah, in central West Bank, while calling for national unity, and chanting in support of the Palestinian detainees, ongoing with the hunger strike, which started on April 17th, 2017.

The procession started from the center of the village, heading towards the Annexation Wall, isolating the villages from their orchards and farmlands.

They carried Palestinian, and chanting for national unity, and carrying posters of imprisoned Fateh leader Marwan Barghouthi, and the Secretary-General of the Popular Front for the Liberation of Palestine (PFLP) Ahmad Sa’ad, in addition to pictures of dozens of political prisoners. They called on all factions and segments of the Palestinian society, to step-up their processions and activities in solidarity with the detainees, and their legitimate demands, and on the International Community to intervene in ending this ongoing, illegal Israeli occupation, and the release of all detainees. On Friday afternoon, the soldiers attacked dozens of nonviolent Palestinian protesters in Beit Ummar town, north of the southern West Bank city of Hebron, while marching in solidarity with the hunger striking Palestinian detainees in Israeli prisons. On Friday evening, the soldiers attacked a wedding celebration in Hebron, and abducted a young man.

In related news, the soldiers assaulted dozens of Palestinian protesters in Beita town, south of the northern West Bank city of Nablus, and Beit Forik town, east of the city, wounding 66 Palestinians, including one who was shot with a live round in the face, and also fired at ambulances, causing damage.