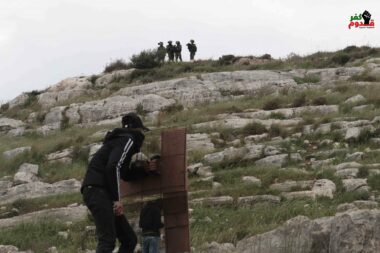 Israeli soldiers attacked, Friday, the weekly procession in Kufur Qaddoum village, east of the northern West Bank city of Qalqilia, injuring one child and causing dozens of residents to suffer the effects of teargas inhalation. 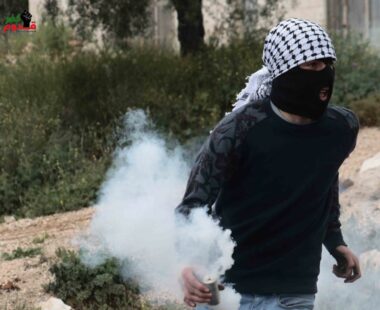 Morad Eshteiwi, the coordinator of the Popular Committee against the Annexation Wall and Colonies in Kufur Qaddoum, said the soldiers invaded the village, and resorted to the excessive use of force against the nonviolent protesters.

Several protesters then started hurling stones at the soldiers who also used drones during the invasion.

He added that the soldiers fired rubber-coated steel bullets, gas bombs, and concussion grenades at the Palestinians, wounding a child, and causing many protesters to suffer the effects of teargas inhalation.

The child, 15, was shot with a high-velocity gas bomb in the leg, before he was moved to a local clinic.

It is worth mentioning that the soldiers also invaded and searched many homes, in addition to occupying several rooftops to use them as monitoring towers and firing posts.

Kufur Qaddoum witnesses frequent Israeli invasions, assaults, and abductions as it continues to hold its weekly nonviolent processions against the illegal Annexation Wall and colonies, and against the closure of the main road, which was blockaded by the military sixteen years ago, to enable easy access for colonialist settlers driving to and from the illegal Kedumim colony, built on stolen Palestinian lands.