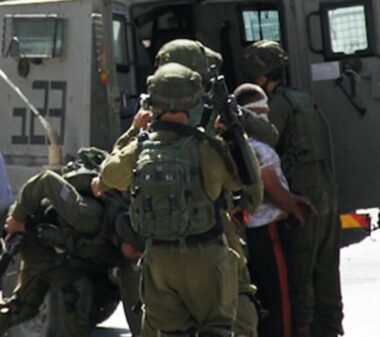 Israeli soldiers abducted, earlier Friday, five Palestinians, including a former government minister and two siblings, from their homes in Jerusalem and Hebron, in the occupied West Bank.

Media sources in Hebron said the soldiers invaded and ransacked the homes of Issa Ja’bari, 55, a former government minister and elected official, before moving him to an unknown destination.

They added that the soldiers also abducted Hatem Qfeisha, 58, a former elected member of the Palestinian Legislative Council (PLC), in addition to former political prisoner, Mazin Natsha, 49, from their homes in Hebron.

It is worth mentioning that since the Palestinian factions announced the upcoming election, Israeli soldiers started escalating their invasions and arrests targeting various political leaders.

In addition, the soldiers invaded Wadi al-Jouz neighborhood in occupied Jerusalem, abducted two siblings, in addition to assaulting and tasering their brother who was rushed to a hospital.

In related news, the soldiers fired many live rounds at Palestinian farmers, working on their lands near the perimeter fence in the al-Qarara town, east of Khan Younis, in the southern part of the besieged Gaza Strip.