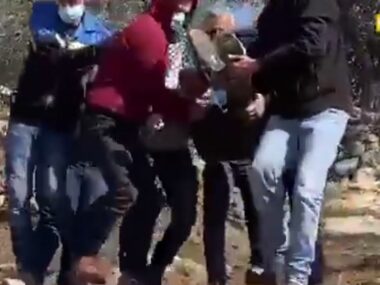 Eyewitnesses said the soldiers shot three Palestinians with rubber-coated steel bullets; one was shot in the head before he was rushed to a hospital, and two in their legs and received the needed treatment by local medics.

They added that dozens of residents suffered the effects of teargas inhalation, in addition to cuts and bruises.

The procession started in front of the local mosque in the village, before the protesters marched to the home of Atef Yousef Hanaisha, 45, who was killed by Israeli army fire, on March 19, and continued their way to their lands, threatened with Israeli annexation.

It is worth mentioning that Hanaisha worked as a carpenter with his brother, however, he also spent the last twenty years of his life as a volunteer Imam of the local mosque.

The Palestinians in Beit Dajan hold weekly nonviolent professions after illegal Israeli colonialist settlers installed an outpost on their lands in October of the year 2020.