WAFA: “US Ambassador to UN announces resumption of aid to Palestine” 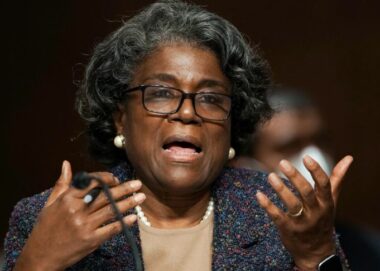 NEW YORK, Thursday, March 25, 2021 (WAFA) – US Representative to the United Nations Linda Thomas-Greenfield announced today that her country was resuming assistance programs to the Palestinian people, starting with a $15 million grant allocated to the most vulnerable communities in the West Bank and the Gaza Strip.

Greenfield also announced that the Biden administration will be taking “steps to reopen diplomatic channels of communication that were halted during the last administration.”

“Our engagements all have the same aim: to build support for a peaceful solution to the Israeli-Palestinian conflict,” she remarked. “Since January, our diplomatic engagement has been guided by the premise that sustainable progress toward peace must be based on active consultations with both sides.”

With this latest US assistance, Greenfield said the US Agency for International Development (USAID) was supporting Catholic Relief Services’ COVID-19 response efforts in health care facilities and for vulnerable families in the West Bank and Gaza. In addition, this assistance will support emergency food assistance programming to communities facing food insecurity, which has been exacerbated by the COVID-19 pandemic.

“This urgent, necessary aid is one piece of our renewed commitment to the Palestinian people. The aid will help Palestinians in dire need, which will bring more stability and security to both Israelis and Palestinians alike,” said Greenfield. “That’s consistent with our interests and our values, and it aligns with our efforts to stamp out the pandemic and food insecurity worldwide.”

She said her administration was committed to advance freedom, security, and prosperity for Palestinians and Israelis in tangible ways in the immediate term. “That’s important in its own right. But these gains will also advance the prospects of a negotiated two-state solution, consistent with international law and in line with relevant UN resolutions. It is essential that both sides take concrete steps to advance the two-state solution.”

She continued, “Under President Biden’s leadership, the United States has recommitted to the vision of a mutually agreed two-state solution, one in which Israel lives in peace and security alongside a viable Palestinian state. We believe this vision is the best way to ensure Israel’s future as a democratic and Jewish state, while upholding the Palestinian people’s legitimate aspirations for a state of their own and to live with dignity and security.”

Greenfield urged the Israeli government and the Palestinian Authority “to refrain from all unilateral actions that make a two-state solution more difficult to achieve, whether settlement activity, home demolitions, and incitement to violence.” She also called for “an end to all acts of violence, including acts of terrorism, as well as incitement to violence and acts of provocation and destruction.”