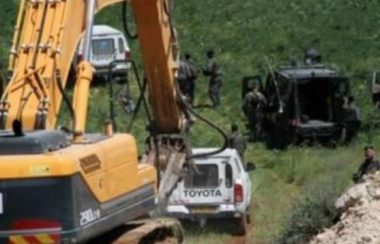 The soldiers bulldozed large sections of a land planted with Hummus, and owned by a Palestinian, identified as Ahmad Daraghma.

The soldiers also bulldozed a farmland owned by Suleiman Abu Mohsin, in the same area and installed military tents, in addition to deploying several armored vehicles and tanks.

Two days ago, the soldiers ordered sixteen Bedouin families to leave their homes and lands, in Khirbat Ibziq village, northeast of Tubas, so that the army can conduct live fire military drills.