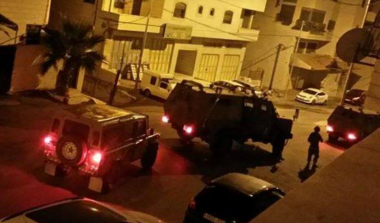 Israeli soldiers abducted, Tuesday, four Palestinians, including two siblings, in addition to damaging the contents of a shop and illegally confiscating cash, in the southern West Bank governorate of Hebron.

Media sources in Hebron said the soldiers invaded the al-Mooreq village, southwest of Hebron, searched many homes and abducted Mo’tasem Ramadan Awawda, and his brother Mahmoud.

They added that the soldiers also abducted Mohammad Nidal Jaber, from Hebron city, after assaulting him while he was heading to his work.

The soldiers also abducted Khaled Salahuddin Abu Za’rour, after invading his pluming store and ransacking it, in addition to illegally confiscating 4000 Shekels.

In relayed news, the soldiers invaded many neighborhoods in Hebron city, and installed roadblocks on roads leading to the towns of Sa’ir and Halhoul, in addition to the northern and southern roads of Hebron city, before stopping and searching dozens of cars, and interrogated many Palestinians while inspecting their ID cards.

It is worth mentioning that the two Palestinians are former political prisoners, who were just released from Israeli detention centers two months ago.

The soldiers also fired gas bombs at the Big Mosque in Beit Ummar, causing many Palestinians to suffer the effects of teargas inhalation.