Israeli Army Abducts A University Student, And A Former Political Prisoner, Near Jenin 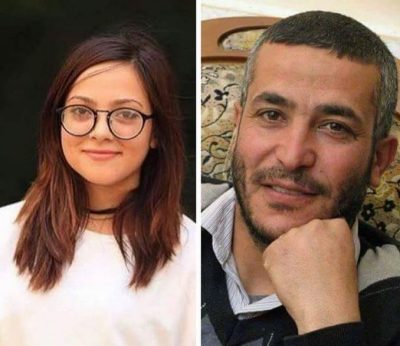 Israeli soldiers abducted, on Tuesday at dawn, a female university student from the northern West Bank city of Jenin, and a former political prisoner from Sielet al-Harithiyya town, west of Jenin.

The Jenin office of the Palestinian Prisoners’ Society (PPS) said dozens of soldiers, accompany by K9 units, invaded the home of Fadi Jarrar, after destroying its front door, and abducted his daughter, Fatima, 20, who studies at a university in Jenin.

It added that the soldiers detained the entire family for more than two hours, while female officers strip-searched the women in one room, and prevented the family, including the children, from sleeping.

The soldiers handcuffed and blindfolded Fatima, before transferring her to an unknown destination.

Furthermore, the soldiers invaded and searched many homes in Silwan town, in occupied Jerusalem, causing property damage and interrogated many Palestinians.

On Monday at night, the soldiers abducted two children from al-‘Isawiya town, in the center of Jerusalem, and took them to an interrogation facility in the city.