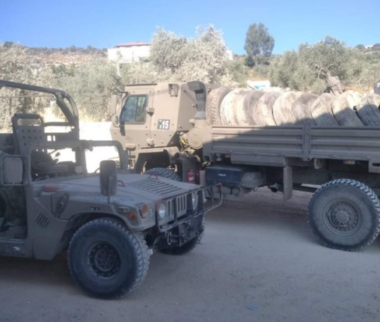 Israeli soldiers closed, on Thursday morning, all roads leading to Sbeih Mountain, in Beita town, south of the northern West Bank city of Nablus, and confiscated a bulldozer.

The soldiers closed the roads earlier on Thursday morning, by placing sandhills and installed roadblocks, to prevent the Palestinians from reaching their lands.

Minwer Abdul-Rahman, the Secretary of Fateh movement in Beita, said the soldiers confiscated a bulldozer belonging to Beit Town Council and closed all roads leading to the mountain, in addition to the heavy military deployment in the area.

The Israeli army is trying to stop the ongoing processions carried out by the Palestinians, including nighty protests, which have been ongoing since the illegal Israeli colonialist settlers, occupied the mountain top and installed an outpost in early May of this year.