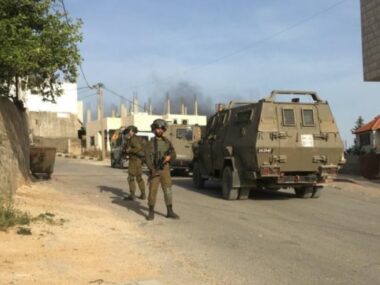 Update: The soldiers abducted Emad Fathallah Sous, after invading and ransacking his home, in addition to breaking into a mosque and searching it,  in Aqraba town, near Nablus. Aqraba remains under strict siege, amidst constant invasions and violent searches.

The soldiers also surrounded the home of Qassem Fawzi Abu Minya, in the center of Aqraba, approximately at three at dawn, and turned it into an interrogation facility where the army, and senior security officers, questioned dozens of Palestinians from several parts of the town.

Human rights activist Yousef Deeriyya said the soldier brought many Palestinians, including children and women into the home, and are still refusing to release them. He added that the military siege on Aqraba is extremely strict, where the army isolated many neighborhoods, in addition to installing roadblocks in the town, and surrounding communities, such as Awarta, Osarin, and Odala town that are also currently isolated and surrounded by the army as part of the extensive search campaign.

The army believes the shooter, who injured three Israeli colonialist settlers, on Sunday evening, escape to Araba, where is either hid or received help to escape to nearby communities, especially Awarta, Osarin, and Odala.

The Israeli army believes the burnt car, which was located by the soldiers, was used by the Palestinians who reportedly injured three Israeli colonialist settlers in a drive-by shooting on Sunday evening. The army towed the car to examine it.

The army continued the massive invasions of homes and buildings in Aqraba, forced many Palestinians out of their homes, android interrogated them during massive searches. Israeli soldiers carried out, on Tuesday at dawn, massive invasions, and searches of homes and property, in Aqraba town, southeast of the northern West Bank city of Nablus, and in Turmus Ayya town, north of the central West Bank city of Ramallah, and abducted one Palestinian.

Media sources said dozens of army jeeps, and undercover units invaded Aqraba before the soldiers used military bulldozers to install sandhills on all entrances of the town, to seal it off.

They added that the soldiers conducted massive searches, also using K9 units, in the main roads of the town, and several neighborhoods, in addition to the area where a burnt car was located. The Israeli army believes the burnt car was used by the Palestinians who reportedly injured three Israeli colonialist settlers in a drive-by shooting on Sunday evening. The army towed the car to examine it.

In addition, the soldiers detained dozens of Palestinians while heading to the local mosque to perform dawn prayers, and interrogated them.

The army also stormed and ransacked dozens of homes in Aqraba, causing damage, and interrogated many Palestinians while inspecting their ID cards.

Furthermore, the soldiers used a surveillance balloon and drones, in addition to firing flares in Aqraba and the nearby Qusra village, during massive and violent searches.

In addition, dozens of soldiers invaded Turmus Ayya village, north of Ramallah, before storming and ransacking many homes, and abducted a young man, identified as Ahmad as-Sahel.

The soldiers also imposed a tight siege on the town, completely isolating it from its surrounding areas, and prevented the locals from leaving their homes while trying to reach a mosque for dawn prayers. On Monday evening, the soldiers invaded Aqraba and abducted George Hamza Bani Jaber, in the Ras al-Ein area in the village, while he was heading back home from work.