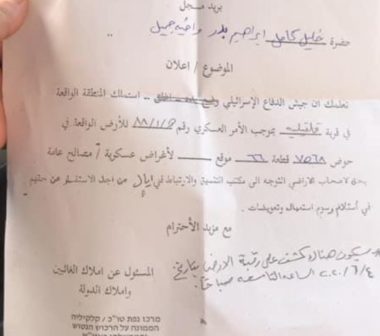 The Israeli military issued, Wednesday, military orders for the illegal confiscation of privately-owned Palestinian lands in the Qalqilia governorate, in northern West Bank.

Mohammad Abu Sheikh, a Palestinian official who monitors Israel’s colonialist activities in northern West Bank, said the orders were handed to many residents, informing them of the decision to confiscate parts of their lands.

He added that the lands, 160 Dunams (39.53 Acres) are located in parts of Qalqilia city, Hibla and Nabi Elias villages, in the southern and eastern areas of Qalqilia.

The lands are already isolated behind the illegal Annexation Wall, and the residents have rarely been allowed access to them.

The illegally confiscated lands are largely used for the construction and expansion of Israel’s colonies, built in direct violations of International Law and the Fourth Geneva Convention, in addition to being used for what Israel called “military purposes.”