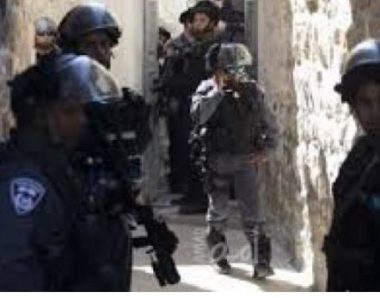 The Palestinian Prisoners’ Society (PPS) has reported that Israeli soldiers abducted, on Wednesday at dawn and morning hours, 19 Palestinians during extensive invasions and violent searches of homes across the occupied West Bank.

The soldiers also stormed their lathe workshop, before violently searching it, and confiscated a machine.

Furthermore, the soldiers invaded many homes in Shiokh town, northeast of Hebron, and abducted Mohannad Mousa Halayqa, 23, in addition to Amer ‘Oweidat, 24.

Many homes were also invaded and searched in Bani Neim town, east of Hebron.

Another Palestinian, identified as Mustafa Abu Ghazala, was abducted from his home in Jerusalem’s Old City.

In addition, the soldiers abducted Odai Abdullah Jamhoor, 29, and Mahmoud Bakr Radea’, 23, from their homes in Beit Anan town, northwest of Jerusalem.

In Nablus, in northern West Bank, the soldiers abducted Mahfouth Nasasra, from his home in Beit Forik town, east of the city. The Palestinian suffers from a neurological condition.

In Tubas, in northeastern West Bank, the soldiers abducted Mahmoud Naji Fuqaha’, 60, from his home after storming and ransacking it.

Two Palestinians, identified as Yousef Rami Zahran, 15, and Rami Assem ad-Deek, 25, were abducted from their homes in Deir Abu Mashal and Kafr Ni’ma, west and northwest of the central West Bank city of Ramallah.

Furthermore, the soldiers abducted Yazan Majed Abu Odah after stopping him at a military roadblock near Jericho.