Army Demolishes A Home Near Bethlehem, Under-Construction Structure Near Nablus 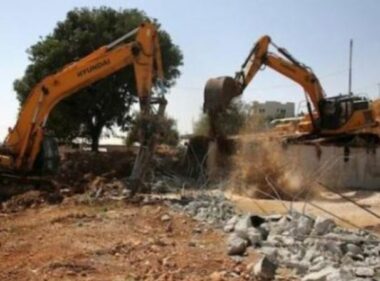 Israeli soldiers demolished, Monday, a Palestinian home, and bulldozed lands, in Artas village, south of Bethlehem, in addition to an under-construction commercial structure, in Deir Sharaf town, west of Nablus, in the occupied West Bank.

The soldiers invaded Artas village, before demolishing an 80 square meter home, in addition to bulldozing a land, owned by Mohammad Roomy.

It is worth mentioning that the soldiers previously issued three demolition orders targeting the home, in Khallet an-Nahla area, and frequently uproot his land, as part of the ongoing attempts to expand the illegal Efrat colony, to link it with Tekoa’ colony, built on Palestinian lands, in direct violation of International Law.

In related news, the soldiers invaded Deir Sharaf town, west of Nablus, and demolished a commercial structure, owned by Abdul-Fattah Tabari, on his land.

During the invasion and the demolition of the property, the soldiers closed the road extending from Deir Sharaf Junction to Ennab Junction, near Tulkarem.