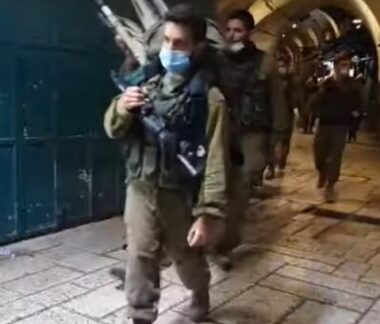 Dozens of Israeli soldiers invaded, on Sunday at night, many Palestinian communities in the Old City and the al-‘Isawiya town, in occupied Jerusalem, and conducted military drills.

Eyewitnesses said dozens of soldiers invaded areas in al-‘Isawiya, and conducted training, before heading to their military base, which was installed on Palestinian lands, west of the town.

The soldiers also invaded many Palestinian neighborhoods in Jerusalem’s Old City and conducted the training.

It is worth mentioning that the soldiers frequently invade Palestinian communities to conduct training, displacing entire families. The military drills include the use of live fire and shells in Bedouin villages and farmlands in the Jordan Valley, in addition to various areas in the occupied West Bank, mainly near Tubas, in central West Bank, Hebron, in the southern part.