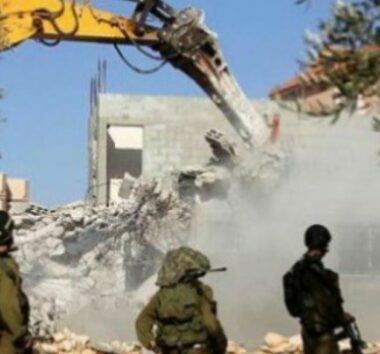 Israeli soldiers, and personnel of the so-called “Negev Development Authority,” demolished a Palestinian home, Sunday, in Khirbat al-Watan Bedouin village in the Negev, rendering a mother and her six children homeless.

Media sources said the soldiers, including special forces and personnel of the Negev Development Authority, invaded the village and demolished the property, leaving the woman and her six children in the cold and the rain.

Khirbat al-Watan village, east of Tal as-Sabe’, and to the south of Hora village, is inhabited by Abu Kaf, Abu Raqeeq, al-Asla’, ash-Shanarna and as-Sayyed, and is one of the dozens of communities not recognized by Israel, and do not receive any services, including electricity, running water and infrastructure or health.

One of the Palestinian communities, the village of al-Arakib in the Negev, has been demolished by Israel at least 179 times.

Like the thirty-four other Bedouin villages “unrecognized” by Israel, al-Araqib does not receive any services from the Israeli government and is constantly subjected to the threats of expulsion and home demolition.

These “unrecognized” villages were established in the Negev soon after the 1948 war, following the creation of the state of Israel in the historic land of Palestine, when an estimated 750,000 Palestinians were forcibly expelled from their homes and made refugees.

In related news, the soldiers demolished Palestinian structures near occupied East Jerusalem, in addition to a home near Bethlehem and an under-construction structure near Nablus.