Palestinian Father, His Son, Forced To Demolished Their Homes In Jerusalem 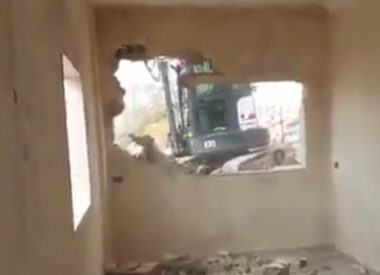 A Palestinian father and his son were forced, Monday, to demolish their own homes in occupied Jerusalem, after the city council issued a demolition order and threatened excessive fines and fees.

Media sources said the Palestinians, Mohammad Qonbar and his son ‘Atiyya, had to demolish their homes in Qonbar neighborhood, in Jabal al-Mokabber town, south of occupied Jerusalem.

The family said they had to demolish their own homes, after the police invaded them several times, and threatened to destroy their property in addition to forcing them to pay a bill which exceeds 100,000 Israeli Shekels.

The family received the first demolition orders three months ago, but their lawyer managed to delay the destruction of the two properties, in addition to filing appeals; however, the City Council decided to go ahead with the demolition without even waiting for the outcome of the appeals.

“It hurts my heart and my soul to demolish our homes,” the father said, “But we don’t own dozens of thousands of Shekels to pay the city for destroying them.”

Many Palestinians in occupied Jerusalem have no other option but to build or modify their homes to accommodate their expanding families, while Israel continues to deny them construction permits, by denying them the right to build on their own land, while it continues to construct and expand its illegal colonies, installed in direct violation of International Law.