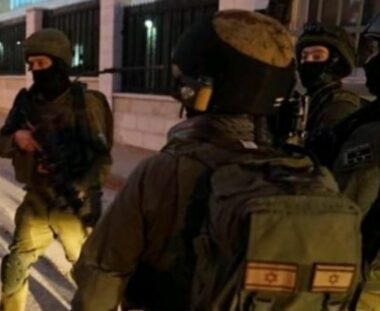 The Palestinian Prisoners’ Society (PPS) has confirmed that Israeli soldiers abducted, earlier Monday, at least sixteen Palestinians, including a child and one woman, from several parts of the occupied West Bank.

The PPS office in Hebron, in the southern part of the West Bank, said the soldiers abducted seven Palestinians, including one child, from their homes in several parts of the governorate, after the army invaded and ransacked them.

The soldiers abducted Aseed Sabri Zohour and Ezzeddin Ibrahim Shehda, from their homes in Beit Kahil town, northwest of Hebron, in addition to two siblings, identified as Wa’el and Mohammad Mousa Shaker, from Sa’ir town, northeast of Hebron,

The soldiers also abducted Bassel Haitham Badawi, 16, and Abdul-Latif Jawabra, from their homes in the al-‘Arroub refugee camp, north of Hebron.

During the invasion into Beit Ummar, the soldiers summoned Mahmoud Shawkat Alqam, 18, for interrogation in Etzion military base and security center, north of Hebron.

The soldiers also invaded Yatta and the Sammoa towns, in addition to installing roadblocks on Hebron’s northern road and the streets leading to Sa’ir and Halhoul town, before stopping and searching dozens of cars and interrogated many Palestinians while inspecting their ID cards.

In the at-Tour town, in Jerusalem, the soldiers abducted Haitham Khweiss, Farid Abu al-Hawa, and Amir Abu Jom’a, from their homes.

It is worth mentioning that the army also abducted a Palestinian woman, who remained unidentified at the time of this report, after the soldiers fired live rounds in the air while shouting at her at the Qalandia terminal, north of Jerusalem.

The woman was not injured, but the soldiers abducted her when she was walking on the section dedicated to vehicles and not pedestrians.

A video taken by a Palestinian in his car, and published by Palestine TV, shows the woman walking on that side of the road, and the sounds of many Palestinians can be heard telling her to walk back and use the pedestrian section.