Army Demolishes A Home, Several Structures And a Barn, in Jerusalem 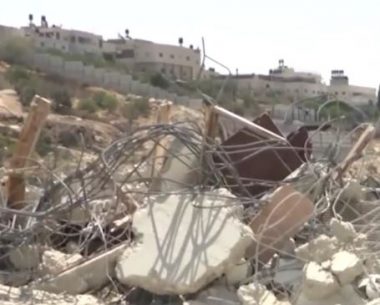 Many military jeeps, accompanied by bulldozers, invaded Beit Hanina after surrounding it, and demolished several commercial structures and a barn, under the pretext of being built without a permit.

Locals said the soldiers surrounded and isolated the entire area before invading it, and demolished the structures.

Furthermore, the soldiers invaded Jabal al-Mokabber neighborhood, and demolished a home owned by Hamza Shalloudi, also under the pretext of being built without a permit. The family said the demolition of their property came without a prior notice, especially since their lawyer managed an obtain an order halting the destruction.

The family only managed to remove some of their belongings from the property, before the soldiers forced them out and demolished it.

It is worth mentioning that the soldiers also handed demolition orders targeting twenty homes in Silwan town, in Jerusalem.